Last week, the Supreme Court granted further review in Dix v. Casey’s General Stores, Inc. (18-1464), a case under Iowa’s drug-testing statute (which covers alcohol testing too).  In Dix, the Iowa Court of Appeals held among other things that two-light duty workers weren’t in “safety-sensitive positions” and that the statute’s immunity protects employers only against claims based on third-party conduct.  Casey’s seeks further review of both rulings (plus one more).

In Dix, Casey’s randomly drug tested workers from a pool of employees it had determined were in “safety-sensitive positions”—a statutorily-defined term parroted in Casey’s policy.  Before testing, Casey’s determined that all warehouse employees were in safety-sensitive positions, even those who performed “light-duty assignments” in an area cordoned off by a chain-link fence.  It then used a third party to randomly select employees to test, administer the tests, and conduct a required medical review.

Three plaintiffs tested positive for drugs, two of whom had light-duty jobs.  The third’s duties included operating a forklift and building pallets—“heavy-duty tasks.”  All three were fired, and they sued (along with one other employee).

The Court of Appeals ruled that the two light-duty workers weren’t in safety-sensitive positions and thus had been improperly tested.  Under the statute, a safety-sensitive position is as relevant “a job wherein an accident could cause loss of human life, serious bodily injury, or significant property or environmental damage.”  Casey’s raised a few arguments on this point, among them that all warehouse workers fit this definition because forklifts “zip[ped] around” and boxes were stacked to the ceiling, so an accident could result in harm to any warehouse worker, duties no matter.

But the appeals court, like the district court, read the definition to focus on a worker’s duties.  And because the light-duty employees, unlike their heavy-duty coworker, did not have “tasks where an accident could risk” loss of life, injury, or damage, they did not come within the definition.  In other words, the employees were not in safety-sensitive positions even if the “general warehouse environment is dangerous.”

In its further-review application, Casey’s points out that amicus curiae Iowa Association of Business and Industry had pressed for an application of the business-judgment rule.  But Casey’s argues primarily that the Court of Appeals misread the definition of “safety-sensitive position” by ignoring the work environment.

Nothing about the statute’s terms compels an exclusive focus on job duties.   If someone asked, “What do you do for a job?” it would not be unusual to respond, “I work in a factory.”  Or grocery store, or restaurant, and on and on.  In other words, an ordinary speaker would deem it acceptable to identify the type of place where she works—a component of job environment—instead of her job’s duties.  The circumstances in which one performs her work are often no less a part of how she conceives of her job than are its tasks.

Finally, it’s not at all impossible to imagine a light-duty employee under the influence of drugs or alcohol carelessly contributing to an accident with one of those zipping forklifts.  Alcohol and drugs after all alter judgment and slow responses.  In a generally dangerous environment, like the Casey’s warehouse, even those whose duties aren’t dangerous may be at risk of causing an accident.  Casey’s illustrates this point by suggesting that the Court of Appeals’ reading of the statute would seemingly exclude the janitor at a nuclear power plant from the definition’s coverage. 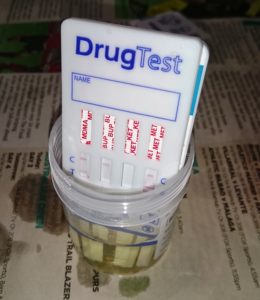 Casey’s also seeks further review of the Court of Appeals’ holding that the drug-testing statute’s immunity provision as protects “employers only from suit arising from third-party conduct.”  As Casey’s reads the immunity provision, it applies where an employer has (1) established a drug-testing policy; (2) initiated a testing program in accordance with the statute; and (3) tested or taken action in good faith.  So Casey’s argues that the immunity is broader than the Court of Appeals allowed.

Besides the provision’s plain terms, Casey’s emphasizes the Supreme Court’s general instruction to read immunity provisions broadly.  And a broad reading of the drug-testing statute’s immunity provision is also consistent, Casey’s argues, with a legislative intent to protect an employer’s right to a drug-free workplace.

The Supreme Court has discretion to decide one, both, or neither of these issues.  It may have granted further review to address the third issue on which Casey’s sought review.  But if the Supreme Court does address either of these two issues, it will have important consequences for Iowa’s workplaces.  We’ll follow up when the Court issues its opinion.