It’s October, and the Iowa Supreme Court’s term is in full swing. Next week the Court will hear argument in Ferguson v. Exide Technologies (No. 18-1600). The case addresses whether an employee may bring a tort claim against her employer if she’s discharged in violation of Iowa’s statute regulating workplace drug testing.  This is an important case for not only employers, but also court watchers.

First some background.  In Iowa, as in most every other state, an employee generally may be fired for good reason, bad reason, or no reason at all.  Everyone knows this general rule as employment at will.  But the rule has its exceptions.  For example, the Iowa Civil Rights Act forbids an employer to fire someone because she belongs to a protected class.  And the Iowa Supreme Court has held that an employer may not fire someone in violation of public policy.  Attorneys know this as the tort of wrongful discharge in violation of public policy.

In Ferguson, the plaintiff was fired after she refused to submit to a drug test that her employer concedes was unlawful.  She sued, alleging first that this violated the Iowa drug-testing statute itself and, second, that she was wrongfully discharged in violation of public policy.  The trial court sided with the plaintiff on both claims, precipitating the employer’s challenge to the public-policy claim.

The claim’s survival turns largely on legislative intent.  A provision of the drug-testing statute says that violations “may be enforced through a civil action” and an employee may be awarded “reinstatement or hiring, with or without back pay,” and other relief, including “attorney fees and court costs.”  By prescribing a cause of action and remedies in the drug-testing statute, did the Iowa legislature intend those remedies to be exclusive?

Ferguson’s employer of course argues yes, likening the drug-testing statute to the ICRA.  The Supreme Court has held that the ICRA is exclusive for discrimination claims.  Ferguson for her part insists the wrongful-discharge claim safeguards the public policy embodied in the drug-testing statute’s employee protections.  In her view, the statutory remedy thus supplements rather than supplants her wrongful-discharge claim. 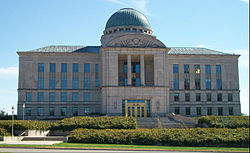 This question looks a lot like one the Supreme Court sidestepped last year.  Ackerman v. State of Iowa (No. 16-0287) held that an employee covered by a collective bargaining agreement could sue for wrongful discharge in violation of public policy. Yet the Court avoided the State’s argument that the remedy available to Ackerman under another Iowa statute prevented her wrongful-discharge claim, finding the argument was too late.

But that didn’t stop the Justices from wading into the issue.  The statute in Ackerman prescribed a “civil action” awarding “affirmative relief” to aggrieved public employees, “including reinstatement, with or without back pay,” and other relief, including “attorney fees and costs.”  Telegraphing how they might analyze a similar statute, the five-Justice majority observed that this provision doesn’t “expressly declare” its remedy is exclusive.  Justices Waterman and Mansfield dissented, writing that Ackerman could “proceed with her statutory right of action.”  She thus didn’t need “a third avenue of recovery”—“especially one that is at odds with” the statute.

The statute in Ferguson nearly mirrors that in Ackerman.  The Justices’ reasoning in that case thus offers a glimpse at how they may decide Ferguson.  But two Justices who joined the majority there—Zager and Hecht—have been replaced.  And Justices Waterman and Mansfield remain.  With this reconfigured majority, Justice Waterman’s Ackerman dissent may supply the foundation of a Ferguson majority.  If that happens, employees will be left with the exclusive avenue of recovery under the drug-testing statute.

We’ll follow up when the Court issues it opinion.